“It is of the greatest importance to create an ideology, with its myths, symbols, and legends, and with all its constructive or philosophical apparatus, and with all the human passion that faith can give to it.” 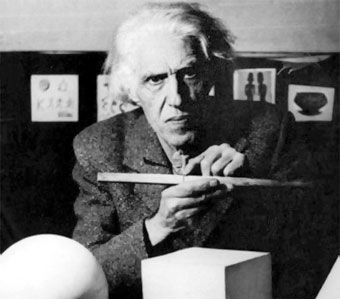 After living and working in prominent avant-garde circles in Barcelona, Paris, Madrid, and New York—the Uruguayan-born artist Joaquín Torres-García (1874-1949) returned to the city of his birth, Montevideo, in 1934. Embraced as a global modernist for his pioneering work in abstraction, in Montevideo he founded several schools of modern art, including the “School of the South,” which was instrumental in bringing the tenets of European and North American modernism to South America and encouraged the development of Latin American art on its own terms.

Torres-García is best known for his semi-abstract paintings of universal, archetypal symbols organized into modernist, gridded compositions in the 1930s and 1940s, as in this painting, where images of suns, anchors, bottles, figures, and other suggestive pictographs are organized into a type of totemic, gridded architecture. Looking to both classic archaic art forms and his modernist sensibility for form and structure, Torres-García strove for a vision of cosmic order and balance in his art, wanting to make work that was universal and timeless, in harmony between the classical and the modern.